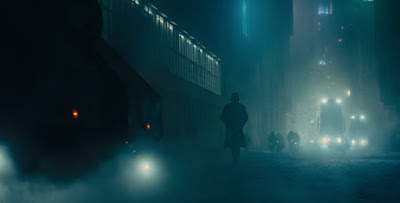 The oldest living soul on Shénnóng knows little more than stories of the Terran Federation. They say back then, you’d look up and see a sky filled with the lights of travelling starships, bringing the wonders of a thousand planets in their bellies: dew-wine, star jellies, mangoes, kroviks, ichigo, froth… Now the skies are dark, and ships only trickle in from the nearby worlds, evading a swarm of pirates and marauders to feed Shénnóng’s endless city sprawl.

You could stay outside all day without getting sick. There were no greendomes. Nobody saved up for a power filter. Nobody had to decide between water rations and medicine.

The stories say that everybody had a chance to really be somebody. You could work hard and get more than a pod barely large enough to lie down in. You didn't spend so much time thinking about escape.

I still don't know what I'm calling this setting, but I want to get at something that strikes me as important to the style of play. Anyone who's played CT knows: your character can die before you're done with character creation. The original set of career options were all perilous af. You weren't an accountant or a graphic designer. You went out into space and risked getting vaporized or disemboweled or eaten. A 4-term character with no DM bonuses to survival has about a 50:50 chance of making it. That's even odds of living past 30. A 4-term scout with the DM bonus has a little better than 2:1 odds, not great.

WTF? Why would anyone risk that? And equally important: why, after you survived all that crazy shit, didn't you settle back down with your modest retirement cashout?

Hopefully, with a setting description like the above, a would-be player will understand the desperation involved. You risk death, because it's the better option. And what's there to go back to?


I commented over in a different location that I imagined this setting (I don't know what I'm calling it yet) being inspired a bit by Sword and Sorcery. And then I thought, hey self, what do you mean by that?

Here's what I mean.

The characters are outsiders. Gameplay should downplay any sense of home, unless home is their ship. Like Conan (or Dumarest!), they wander about.

The bar for morality is low af. There are some seriously horrible people in positions of power, either deliberately cruel Caligula style, or sacrificing people for the "greater good". The characters can be wholesome if they want, but really they just have to be not psychopaths.

Life is hard. This ain't no happy federation. The standard of living will probably vary from world to world, but there tend to be a lot of trudging and toiling peasants ruled by callous nobles. Maybe literal peasants and nobles, maybe factory laborers and executives. If there's a utopia planet, it's somewhere off the map.

Places are creepy and weird. Think of images like the one above, featuring the tiny human and the towering environment. It's a bit like fascist architecture, awe inspiring and intimidating. In this setting there should often be something looming, like a cliff, or a ruin, or some asshole prince's pleasure tower, or a giant ship hovering. There's mist covering the ground, maybe, or the colors are just a bit off. It's not horror, but it's often a little unsettling.

Scientists are the new sorcerers. Instead of some dark ritual where a naked human is sacrificed on an altar to a forgotten god, it's a laboratory and some human-centipede type experiments. Someone's probably trying right now to open a gate into another universe. Probably some secret cabal are trying to "improve" humans, without asking those humans if they'd like to be improved.

Action! If one of your adventures doesn't involve a PC knife-fighting a pirate warlord in a sweaty arena, something has gone terribly wrong. Cepheus lends itself to quick-witted, clever characters who probably should avoid fights if they want to survive, but every once in a while things are gonna get rough and stabby.

Posted by Matt Wilson at 5:13 PM No comments:

I made some revisions on that last jump map and outlined the subsector. 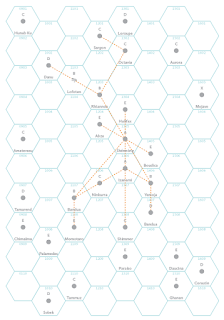 By chance the subsector's two class-A starports are right next to each other, and they're pretty close to the center. The orange dotted lines denote regular or semi-regular commercial/passenger traffic.

Shénnóng is a high-pop industrial world, overdeveloped, polluted, controlled by rival megacorporations whose decadent executives squeeze productivity out of their workers.

Izanami is an arid world with an unbreathably thin atmosphere, but it's an abundant source of [some valuable heavy metal]. No one gains political power on this world who is not either part of, or a major contributor to, the mining guild.

Yemoja is 97% water, limited to small chains of volcanic islands. For centuries it has been ruled by the five families.

Lofoten once hosted the most impressive shipyard in the subsector, but no starships have been built there for at least a hundred years.

When the Federation collapsed -- it's been at least a hundred years now -- many worlds fell off the trade lanes. Certainly no ship with news from Earth has visited any world in this subsector for as long as anyone can remember. Those living in the more cosmopolitan worlds probably know little about the planets out on the edge of this subsector, let alone the birthplace of humankind.

Next steps: hooks. What's going on around here?
Posted by Matt Wilson at 10:58 AM No comments:

I had it in my head to create a thing, a big and awesome setting for the Cepheus Engine, inspired by ideas at the heart of Classic Traveller: space travel is uncommon, the space lanes are dangerous, worlds are often isolated, people in power often suck, characters are troublemakers who didn't have the good sense to retire to a quiet life.

I imagined a big sector of stuff, old Terra in the middle, the ruins of the old Federation, dissolved by greed and politics and war and who knows what else into isolated clusters, plagued by pirates.

Don't get me wrong. I think the ideas are still worthwhile. Just, I think it'd be better to start smaller.

Like Christopher Kubasik says over at Tales to Astound, start small.

So I think something practical to start with would look like this: 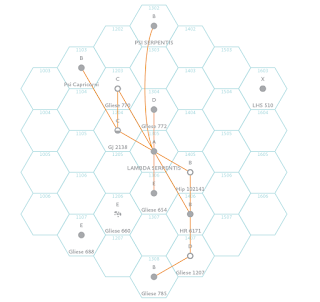 Imagine a bunch of isolated clusters like this, centered around A-class starports and/or high-pop worlds.

The bottom edge, Gliese 785, is 6 jumps from Earth via a jump-2 ship, or 9 hexes as the space crow flies. I think I'll tweak those jump routes so that those bottom worlds aren't regularly traveled and the way to Earth is basically unknown to those who live 'round these here parts. Assuming anyone cares about Earth. We're not all Dumarest wannabes.

But anyway, here's 14 worlds. A couple months of shenanigans easily, even if the characters only visit half of them. More if there's a good reason to revisit.

Maybe the thing has a jump-3 map like this, and then it has a not-detailed map of stars, with notes about what kinds of things would be in different regions, e.g. what is probably to spinward of this particular map.

For the systems above, planet details, local maps, rumor  and encounter tables, patrons...

That's the plan for now.

Posted by Matt Wilson at 9:52 PM No comments:

About the Dog Blog